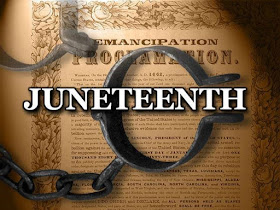 This is the sermon I delivered on Sunday, June 19, 2016 at the congregation I serve in Charlottesville, Virginia, the Thomas Jefferson Memorial Church - Unitarian Universalist.  You listen to it if you'd prefer.


This is the still unfulfilled promise of Junteenth – a song of hope, and a world in which it can be sung by everyone; a song of faith, and a people who will truly believe it; a song of kindliness and a country in which it can be lived out; and a song of hope and love without having to give up who and what we are.  Hope is a song in a weary throat.  [This, by the way, was the original title of Pauli's autobiography, Song in a Weary Throat.  Someone at the publishing house, no doubt, decided that for the second printing the title should be changed to Pauli Murray: The Autobiography of a Black Activist, Feminist, Lawyer, Priest, and Poet.  It might be more descriptive for people who'd never heard of her, but oh what poetry was lost!]


One year ago this past week Dylan Roof walked into a Bible Study at Emanuel African Methodist Episcopal Church in Charleston, South Carolina and murdered 9 people, at least in part because he did not see African Americans as fully human, at least not in the way he saw himself.  He apparently had not heard about the “absolute equality” affirmed by General Granger in Galveston one hundred and fifty-one years ago today, or he’d heard but didn’t believe it, and so he could believe that murdering these people was a justified and acceptable act.


This past week Omar Mateen walked into the nightclub Pulse in Orlando, Florida and murdered 49 people (wounding an additional 53), at least in part because he did not see people in the LGBTQ community, or the Latino community as fully human, at least not in the way he saw himself.  And whether it was this blind and blinding hatred, or the distortions and perversions of a twisted religious ideology, Mateen was able to believe that his murdering these people was a justified and acceptable act.


When you can deny the fundamental humanity of someone, you can justify doing just about anything to them.  It doesn’t count if they don’t count.  Fifty-three years ago, on the steps of the Lincoln Memorial, the Rev. Dr. Martin Luther King, Jr. called the Declaration of Independence’s assertion that “all […] are created equal” to be a “promissory note” that had not yet been made good on.  It still hasn’t.  And so the weary throat must keep singing.


Someone else who knew and beautifully expressed that song was the poet-queen Maya Angelou.  She speaks of it in one of her most well-known and oft-quoted poems, “I Know Why the Caged Bird Sings,”


The free bird leaps
On the back of the wind
And floats downstream
And dips his wings
In the orange sun rays
And dares to claim the sky.

But a bird that stalks
Down his narrow cage
Can seldom see through
His bars of rage
His wings are clipped
And his feet are tied
So he opens his throat to sing.


The free bird thinks of another breeze
And the trade winds soft through the sighing trees
And the fat worms waiting on a dawn-bright lawn
And he names the sky his own.


But a caged bird stands on the grave of dreams
His shadow shouts on a nightmare scream
His wings are clipped and his feet are tied
So he opens his throat to sing.


Oh the throats that sing this song may indeed by weary, yet the song remains strong.  This song has many variations, yet still it is one song – the song of freedom and a long-ago made promise fulfilled.  But here’s some good news:  Dylan Roof didn’t silence it; Omar Pateen didn’t stop its steady beat; Donald Trump and his crowds can’t drown it out.


But there’s work to be done.  We – those of us who have been taught that we are White – need to take it up, add our voices to those who have been singing so long that their throats are weary – oh so weary – of singing this song that should never have had to be sung.